Earlier this month on a Thursday afternoon, Steven and I headed to Idaho to pick up Hannah from school and bring her home for the summer. It was an enjoyable drive with just the two of us. We spent that night at a hotel in Rock Springs and continued on our way, arriving in Rexburg in time to help Hannah load her stuff into our car and take a walk while she and her roommates finished cleaning the apartment for inspection. We had lunch there and then started the drive home.

Late in the afternoon, Steven was driving along the I-80 when I glanced over and noticed that the tire pressure light was on. I asked Steven about it and he shrugged. It didn't seem to be a problem. A short time later there was a bit of a jolt and a thumping noise: we had a flat tire. 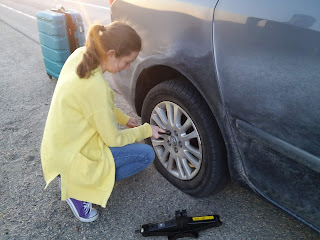 Steven pulled over and we climbed out of the car to inspect the damage. Yes, it was definitely flat. Hannah volunteered to change it, although Steven helped with instructions and jacking the car up. When the tire came off, there was a huge gash on the inside wall. There was no way we were going to be able to patch that. We fished the spare tire out from amongst Hannah's luggage and before too long, we were on our way again.

We arrived in Rawlins and decided to stop there for the night and get the tire replaced. We found a hotel, and early the next morning, Steven set out to find a tire place so we could get on the road again. He returned to the hotel room to inform me that the one place that was open didn't have the right size tire, but he had a phone number for another place that might have it, but it didn't open until later... When they did open, they didn't have the right size tire after all. Steven ended up going back to the first place and having a tire that was very good quality, but not quite the right size, installed on the van. With that we were able to return home. That was Saturday.

On Monday, I took the van to our local tire place. From past experience I knew that because our van has all-wheel drive, when we replace one tire we have to replace them all so they wear evenly. I didn't know exactly what having one odd sized tire would do, but it couldn't be good. Sure enough, I ended up having to get all four tires replaced, as well as the windshield wipers (they really needed replacing). As I was walking back to my car when they were done, I noticed how filthy the van looked, and how faded and old the license plate looked. I couldn't do anything about the license plate, but I decided to swing by a carwash on my way home.

The weather was cold and I had just spent hundreds of dollars on tires... what was a few more to go through an automatic carwash? I arrived home a short time later, pulled into the garage and then stepped back to admire my sparkling clean van... and noticed that the rear license plate was missing. Uh oh.

I drove back to the carwash and looked around. The doors to the carwash bay were closed and I didn't want to pay for another carwash to get them open so I tried to peer through the cloudy windows in the door but I couldn't see my license plate. There was no attendant at the carwash. The only other people around were other folks handwashing or vacuuming out their cars... and they were starting to look at me funny. I tried calling the phone number posted for the carwash owners, but there was no answer. I left a message, but they didn't call back right away. Finally I drove home in a bit of a panic. I didn't have my registration stickers; what if I got pulled over? What was I going to say? I *lost* my license plate?! What would they think?

When I returned home, I looked online on the DMV website to see what it might say about lost license plates. I ended up just calling the police and reporting the lost plate, telling them what had happened. I was reassured that if I were to be pulled over, if I told them I had lost the plate and gave them my case number, they would probably be understanding. I took some deep breaths. It wasn't a big deal. I could go to the DMV and get new plates. The registration expired at the end of the month anyway and I needed to get it renewed... I could just do both at the same time. 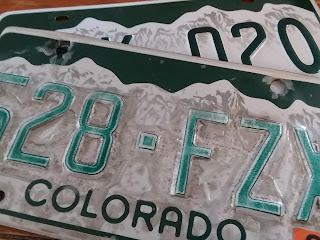 The next morning I went to get the smog inspection the car needed to renew the registration. I worried a bit again about not having a license plate on the car, but they didn't say anything. From there I went to the DMV and was able to get new plates and attached the registration stickers to them. I attached the new license plate to the car there in the DMV parking lot with a sigh of relief. The new plates were pretty. The number wasn't as easy for me to remember, but as I drove home, I contemplated ideas to help me remember it. This was just a minor inconvenience after everything else that had happened.

Later that afternoon, I finally received a return call from the carwash owner. She had found my license plate and put it in a place where we could come get it. So now I have both the new plates and the old ones.

And a day or two later I opened up the back of the van and noticed that the car people had given us back the fancy new tire we had acquired in Rawlins. Yay. What do you do with just one slightly used $200 tire?

Catching Up on the Last Few Months...

- October 11, 2020
It's October already. It's October of one of the strangest years I've ever experienced. I realize I've gotten behind on my blogging this year, so here are some highlights of what has happened since our Yellowstone vacation in July: Last half of July:  a few meetings, a dentist appointment, an orthodontist appointment. Not much really happened as most of stuck around pretty close to home. August:   Josh got a job at the Mile High Flea Market , working in concessions. The flea market is only open on weekends, so he has been working on Saturdays and Sundays. Luckily with home church and meeting at 9am when we do meet at the church, he has been able to attend sacrament meetings either before or after work. He works at "Delectables", a place that sells ice cream, tornado potatoes (like a cross between curly fries and potato chips) and funnel cakes among other things. One Saturday, the rest of us went to the flea market to see what it was like. It's kind of a c
Read more

What I Do When There is No Place to Go 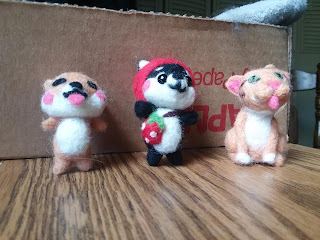 The last several months of "safer at home" has meant a lot of time spent within my own four walls. Of course, I'm a homebody anyway, so I'm probably not home much more than I was before COVID and quarantine, but I've had more time with my family around, and less time on the desktop computer that I share with Peter. Of course the usual things like housecleaning and laundry haven't changed much, but I have had a lot of free time on my hands. Here are some of the things I've been doing to keep myself busy over the last few months: Books read:   Charles Todd's Ian Rutledge Series (20 books),  Charles Todd's Bess Crawford Series (9 books),  Jacqueline Winspear's Masie Dobbs Series (Books 1-10... I have 5 more to go).  Miscellaneous Agatha Christy books  The first six or so Lillian Jackson Braun's "The Cat Who..." books  and I don't know what all else I might have picked up to read in an afternoon. The first three above are historic
Read more