The kids are home from school this week for Christmas. Steven finished his last term on the 16th and has three weeks off. We've enjoyed this week at home. We've had a lot of activities to keep us busy, besides the preparations for the upcoming holiday.

On Monday, the kids pulled out the Legos and made a movie: Lego Man's Adventure. 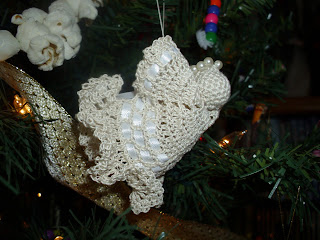 I crocheted an angel for our Christmas Tree.

On Tuesday, the kids made another movie with the Legos: Lego Man's Day. 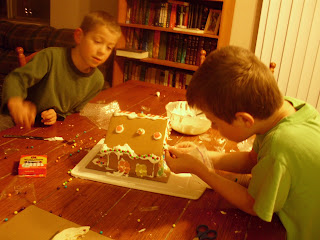 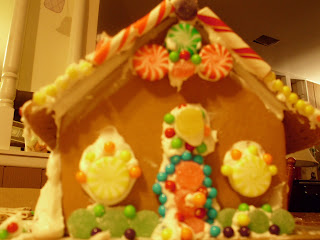 We also put together our Gingerbread house. 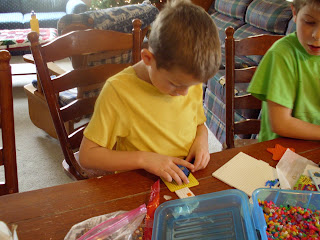 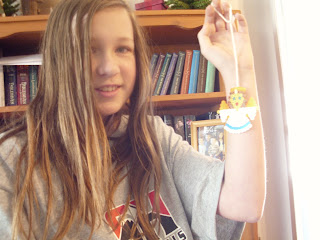 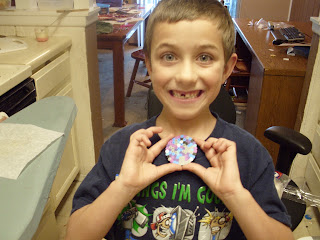 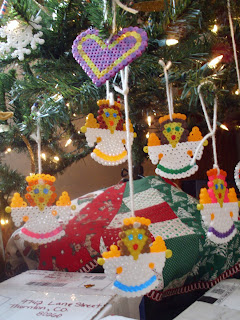 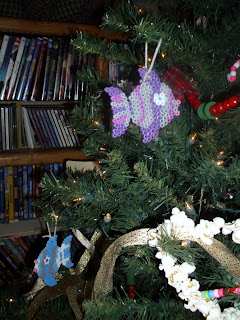 On Wednesday and Thursday, we pulled out the beads. These beads are placed on pegboards, and then ironed together.

Today is Friday. We are going to tour a Candy Factory right now.

Life is crazy, but with the holidays approaching, they are even crazier. I've been wanting to write a blog for a while, but I've scarcely had the time to sit down, let alone write a well thought out, interesting, coherent statement that I'd like to. So, finding I have half an hour before I need to move on to other things, (actually I'm eating lunch as I type this) I'll let you all know what's been going on here.

1. Breakfast with Santa. The month of December opened with a bang with our ward's annual breakfast with Santa. With the dissolving of the activities committee, it fell to Primary to organize this year's breakfast. So, for the last month I've been busy working with my counselors and others who volunteered to help to plan and organize a breakfast complete with food, decorations, activities, music, photographer and of course, a visit from Santa, with treat bags for him to hand out. In the process I gained a great appreciation for those who have organized these kind of events in the past, as well as a relief that I won't have to do it again for another year. Even though a lot of people showed up that snowy morning, we still had plenty of food, and that is what really counts, isn't it?

2. Concert #1. Hannah was able to eat a quick breakfast, but was gone before Santa arrived because she needed to go to a rehearsal for an Orchestra Festival which was held that same evening. Twelve middle school and high school orchestras participated in the festival, each playing a few songs individually, and then all playing the Cancan together at the end. It was awesome to watch. I attended the Festival with the boys, while Steven went to our ward adult Christmas Dinner that evening, since he had agreed to host a table before he realized the festival was that evening. 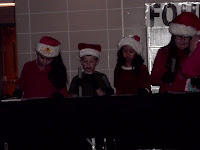 3. Concerts #2 & #3. On Tuesday evening John had a performance of his bell choir. He played three songs, and then he was the one to put all the bell equipment away while his school choir sang several songs. Again I watched this performance with just my boys, because Steven was at the middle school watching Hannah's holiday orchestra concert, this one with just her school. I was glad that Steven was able to hear her play her viola. 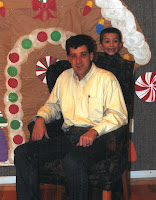 4. Cub Scouts. This same evening (Tuesday) was the boys' cub scout pack meeting, but we weren't able to go. I did make frosting and delivered it to one of the other cub moms so they would have it for their cookie decorating activity. For the last several years our cub scouts have been meeting with the wards to the south of us, at the southern church building, but because our YM and YW meet at the north building and it is hard getting kids to both buildings on the same night at the same time, we are separating from the south wards and joining with the ward to the north of us which meets at the north building. This has involved lots of fun for me and the bishopric in trying to figure out who is going lead which den, when pack meetings should be, getting people trained before recharter comes up in January, etc. I've been to several meetings lately in preparation for this change, and Tuesday's pack meeting was the first night that all the boys from the two wards were supposed to meet together.

4. More Music? I got sing with our stake choir at our stake conference a few weeks ago, which was a lot of fun. While the performances have yet to take place, I'm also attending choir practices in preparation for our stake music concert and our ward Christmas Sacrament Meeting. Hannah is also able to participate in our stake orchestra which will be performing at the stake music concert as well.

5. What else? My half hour is up, so here is a quick rehash of other things in the last two weeks that have made my life so crazy: weekly presidency meetings, burning 50 CDs for Primary with the songs for next year, and making and printing labels for those CDs, having guests over for Family Home Evening, Ward Counsel, interviewing and shopping for the Relief Society spotlight basket, planning which teachers will be teaching which class next year, Christmas gift shopping/making - I haven't gotten around to wrapping yet, volunteering at the boys school as many as six hours a week, visiting teaching, grocery shopping, laundry, house cleaning, honor roll awards ceremonies (for both Hannah and John), shoveling snow, helping my children with homework and encouraging them to get their chores done, helping Steven with graphics for his Marketing class, cooking dinners, individual and family scripture reading, shuttling John to and from piano lessons and all the boys to and from school...

Steven and the kids get out of school for Winter Break on the 16th. Will all this craziness ease off then? Maybe. If I go crazy before then, at least you'll know why.
at 12:57 PM No comments: