Saturday was John's birthday. He is 14 years old now! He got a frog cake. His gifts included origami paper, a small LEGO train, an alarm clock, a FLUXX game, and a "Phantom of the Opera" piano book. 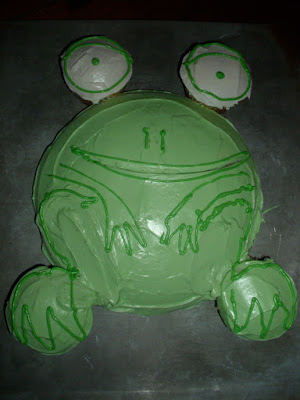 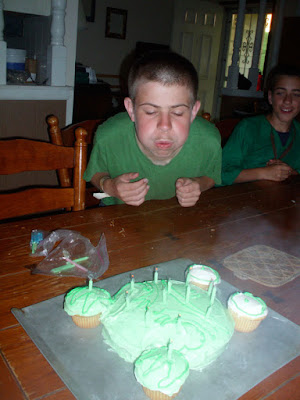 On Sunday, John was ordained to the office of Teacher in the Aaronic Priesthood. It is so awesome to watch my boys get older and more mature.
at 10:06 AM No comments: Links to this post

John and Josh went to Scout Camp last week. They were gone for almost the entire week, leaving Monday and returning Saturday morning. It sounded like they had a lot of fun!

John made a bull neckerchief slide and he also hammered a bowl in his metalworking class. It turned out really well! 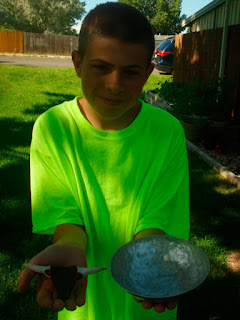 The following pictures of the boys were taken by their scout leaders at the camp: 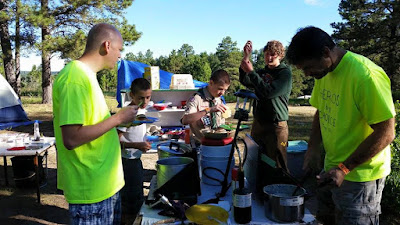 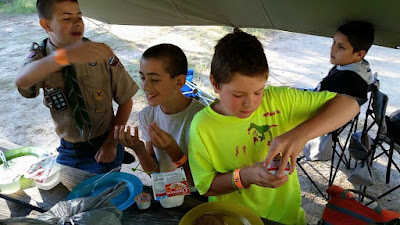 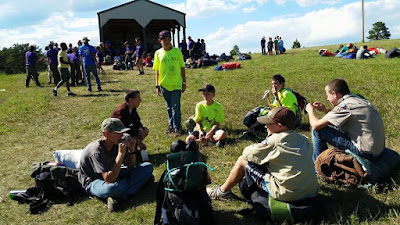 The last couple days in June, we drove to Wyoming, where we joined several members of my family for a family reunion. My brother-in-law, Dean, reserved the campground, which was actually a youth camp. It was really nice with bathrooms (with showers!) a kitchen and mess hall and an amphitheater. There was also a volleyball court and a place to play tether ball. We were able to go canoeing on a nearby pond. Some family members took advantage of a shooting range. Hannah went with them, and I understand that she is a pretty good shot!

I didn't take as many pictures as I should have, but here are some that I did take:

We caravanned over a bumpy dirt road to get to the pond to go canoeing. Our van actually dropped it's spare tire along the way! Luckily someone picked it up for us.

Summer Days and an iPad.

My dear mother sent me a message on Facebook today: "MaeLyn, are you okay? I just realized you haven't written a blog in a month!"

There's just something about summer. I feel a little bit lazier. The kids are home and I have to compete for computer time. With the kids home when I am on the computer I find it more difficult to concentrate on anything. Either they are gathered around watching everything I do, or they are lurking, waiting to steal my seat if I ever stand up, or they are elsewhere in the room being noisy. I love them dearly, but they do make it difficult for me to think sometimes.

Anyway, here's what has been going on this summer:

About a month ago, a brother in our ward called to say he had a first generation iPad that he didn't need anymore, and he was wondering if we would like it. I told him, "Sure!" He brought it to church the next Sunday. The kids were very excited about it, and a month later, the novelty has yet to wear off. Josh and Peter spend most of their time on it watching minecraft videos on YouTube. Hannah plays SIMs games on it, and changes the background images daily. I'll admit I enjoy playing games on it as well. 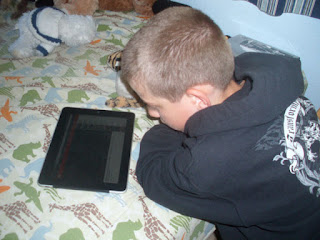 In some ways the iPad has been a good thing. It gives the kids one more electronic device to share among them, so they aren't competing quite as much over being on the desktop computer. We've been able to download e-books from the library onto it, which is helpful since there are some books we want to read that are now only available as e-books.

On the downside, it is another electronic device for the kids to fight over, and to spend long hours staring at. Because it is new, I haven't set up rules as far as limiting time on it, or doing chores before getting on it, so the kids start first thing in the morning and continue until I make them turn it off at bedtime. I don't think it is ever left alone from morning until night; even when it needs to be recharged, the kids just gather around the outlet to keep playing.

Because it is a first generation iPad, it can't be upgraded to the most up-to-date operating system, so a lot of apps won't work on it. Some things we are able to download earlier versions of by first downloading them to our desktop computer, but that doesn't always work either. Also, I'm too cheap to pay for any apps, but there are plenty of free stuff that will work, and it is plenty of fun as it is.

Besides playing with the iPad, normal days are taken up with reading (we go to the library once a week), swimming, trips to the park, watching movies, bike rides, and playing with LEGOs. A few other exciting things have happened this summer, but I'll write about them separately.

I apologize for the month long vacation. I'll try to do better in the future.
at 9:18 AM No comments: Links to this post