Do I talk funny?

Several years ago, I was talking to someone and he asked why Steven and I talk differently.

"We talk differently?" I asked him.

"Well, yeah. You don't pronounce things the same way most people around here do."

"Could it be that we're from California? Maybe we have a Californian accent instead of a Coloradan accent."

"Maybe." He didn't seem convinced. I wondered if it was a product of education, or having lived in other countries as missionaries. Did we pick up a foreign accent somewhere along the way? I don't know.

Another time a lady was sure I was from England because she thought I had an accent. My ancestors may have come from England centuries ago, and I enjoy British TV shows like "Doctor Who" but no, I'm not from England.

More recently, Hannah has begun mocking the way that I say certain words. For some reason, when I say the word "about" it sounds like I'm Canadian and it sounds like "aboot". No, I'm not Canadian, nor have I ever even been to Canada, but that is the way that particular word comes out of my mouth.

Also, according to Hannah, when I say certain words starting with "wh" (like "wheat") it comes out more breathy somehow, with some emphasis on the h. ("h-weet") Why? I have no idea.

Is how people talk a product of their surroundings? Is it due to how the people around them talk? Does what we learn in school or read in books affect how we speak?

A few days ago I was talking with a few other women from church about boots, and one lady said she wanted a pair with a hill. A hill? I wondered: is that some kind of arch support? It seriously took me about 15 seconds - a long time in the midst of a conversation - before I realized that she had meant a heel. Duh! As I thought about it, I realized that a lot of other people pronounce that word and other similar words that way, and that I'm the odd one who says them to rhyme with eel rather than ill. Is that a Colorado thing? or a Midwest thing? I don't know. It's just another example of how I talk weird.
at 10:18 AM No comments: Links to this post

I love how creative my children are.

We didn't build gingerbread houses over the Christmas holidays, but the kids still wanted to do it, so we made them on Martin Luther King Jr Day since the kids didn't have school.

I made one big gingerbread house out of actual gingerbread, and then had extra graham crackers so each of the kids could make their own individual one if they wanted to. Hannah and John worked together to decorate the big house, while Peter concentrated on building his own. Josh was busy with something else at the time, but he built his own small graham cracker house later. 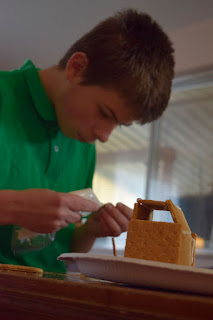 Cleaning Out a Hoarder's House

The last week of December, I received an email to say that there was a lady on my street who was moving out of her home, who needed some help with the move. Thinking that might be a great way to alleviate some end of the holiday break boredom, I gathered up the kids and we headed up the street.

The lady is a psychological hoarder. Her house is huge - at least six bedrooms, (she used it as an assisted living home) and it was FULL of stuff. I started with the entryway closet, pulling out the dozens of coats and other clothing that were hanging there and taking it out to her pickup truck. Next came the top shelves with their literally hundreds and hundreds of  vacuum bags. When I asked what she wanted done with the vacuum bags, she told me to put them in a box to donate; her vacuum is a Dyson that doesn't use bags! That was just the beginning. The lady collects dolls and clocks and pets (she had two or three dogs, about five cats, a parakeet and a bunch of fish). She had a sewing room full of bolts of cloth and various sewing supplies and projects in various stages of completion. We and another family that also showed up to help spent about two hours that day and three the next dumping the contents of drawers into boxes without labeling or sealing anything. (She told us to do this because she thought it would make it easier to reuse the boxes...) I would have hated to be at the unpacking end of the operation! John and Josh went with her a few times to unload the boxes from her pickup at the house to which she was moving before they returned for more stuff. The evening of the second day, a moving van showed up which was to move the rest of the stuff, though I couldn't imagine how it would all come close to fitting, even with the many boxes that had already been brought over in the pickup. The lady paid the kids who had helped some cash, and we headed home to pack for our trip to Utah.

Fast forward the time while we were in Utah. When we returned home, there was a message on the answering machine from the lady who was moving into the house up the street. She had heard that we had helped the first lady move, and was wondering if we would be available to help some more. I arranged to go up the next day while the kids were in school. I spent four days, and about nine more hours in that house. Three of those days were spent in the kitchen, clearing out cupboards, (What does a person need with six frying pans of the same size, or four complete spice racks? Or 20+ pie plates? And why are there cookie cutters in almost every single cupboard and drawer?) throwing away expired food (Some of which expired as early as 2008, but I did come across some paper napkins celebrating the class of 1999.) and trying to figure out what on earth were some of the odd gadgets (as seen on TV!). Monday I spent three hours in the basement sorting through a mountain of sheets, towels, clothes, table cloths, bathmats, and blankets, folding them and then setting some aside to be used, bagging up some to donate, and setting some aside for the original owner. (Actually, I think she must still own the house and that the second lady is renting it from her... I don't know how else she could get away with leaving so much of her own stuff there.) The house finally has some order to it; the floor is visible and clean now, which it wasn't really before.

I don't have any plans to go back unless I get another phone call about another project. While it was nice to earn some money to fund my hobbies, (The second lady paid me $10/hour for all hours worked) I missed having the time at home to do the stuff that I wanted to do here. The experience made me want to clean out and organize what I have, to get rid of things I don't use. I don't ever want my home to be like the house up the street was, with its beautiful big kitchen and many bedrooms, but no clear surfaces to set anything down, and everything crowded with tons and tons of stuff.
at 9:16 AM No comments: Links to this post

A Trip to Utah, a Wedding, and an Accident

New Year's Day, much too early for having stayed up the night before, we climbed in the car and set off on a trip to Utah to attend my youngest sister (Heidi)'s wedding.
In Utah, we stayed at my parent's home in Utah. It was crowded with several of my siblings and their families, but a lot of fun. I was still playing with my new camera...


On Monday (the 4th), we dropped Hannah off at BYU with her cousin Jessica and she got a tour of the University, as well as a taste of what some of the classes are like. Hannah is hoping to be able to attend BYU in a year and a half or so when she graduates from high school.

Heidi and Ammon were married in the Bountiful temple on January 5th. It was a beautiful ceremony and Heidi looked radiant. After the ceremony, lots of pictures were taken. I took a few pictures of the temple before the wedding, but didn't pull out the camera again until most of the wedding photos had been taken. (There were plenty of more experienced photographers there.) 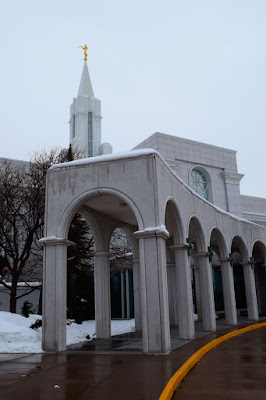 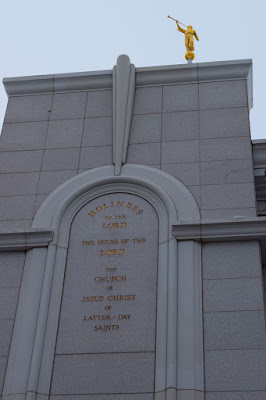 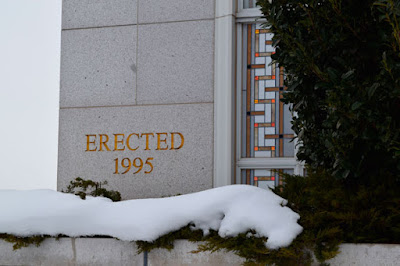 Then we asked my sister Amber if she would take a few pictures of our family. She agreed, even though she wasn't familiar with our camera. 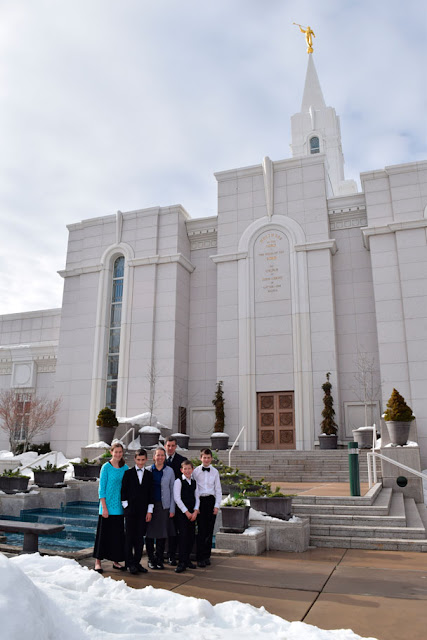 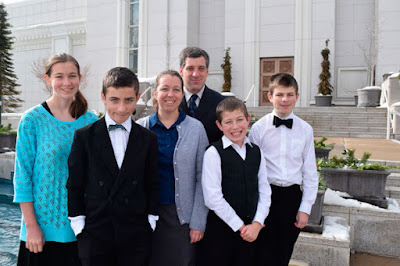 As soon as we were done taking pictures, we climbed in the car and headed for home. There was a wedding luncheon and a reception that evening, but we had an 8 hour drive ahead of us, plus seminary in the morning, so we set off on the I-80 across Wyoming.

We had only been traveling a couple hours (we hadn't reached Lyman yet) when there was an accident. Ahead of us, an SUV was towing another car was in the left lane, and a semi was in the right lane, and we're not sure exactly what happened (possibly the SUV tried to change lanes and clipped the front of the semi) but suddenly the semi was fishtailing and the SUV was rolling off the right side of the road, breaking most of the car windows and losing the car they were towing. Steven pulled over to see if he could help.

We stayed there on the side of the road for about an hour while Steven did what he could to help. The guy driving the semi also pulled over. He didn't seem to be injured at all, but he was on his phone reporting the accident. There was a bunch of people in the SUV: a woman, a boy about John's age, and a few men. One of the men in the car injured his back and couldn't exit the back of the car. Steven loaned them blankets, paper towels, and water while we waited for emergency personnel to show up. A truck from the fire department, a sheriff car or two and an ambulance appeared after a while, and the man in the SUV was laid on a board and carried to the ambulance. We stayed until things looked like they were under control, and then we continued on our journey. 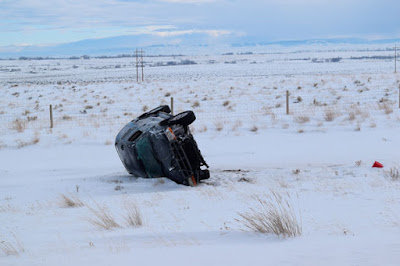 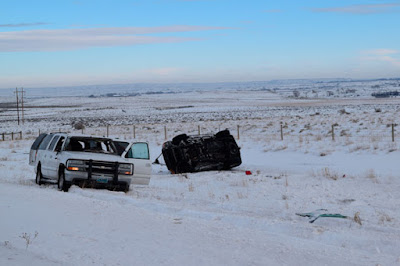 We arrived home shortly after 10:00 that night. As much as we had enjoyed seeing family and Heidi's wedding, we were thankful to be safely home again.
at 12:56 PM 1 comment: Links to this post

We had a super Christmas.
We got up, we opened gifts.
We ate breakfast,
we played with gifts.
We relaxed,
we played games.
We had a delicious dinner.


What more could anyone ask?

I got a DSLR camera for Christmas. It is a Nikon 3300 and I'm still figuring it out, but I've had lots of fun playing with it!

This is what we did Christmas Eve:

(Click here to see the entire article by FOX31)
at 11:05 AM No comments: Links to this post