This weekend I had fun creating a word find from one of my favorite book series, Percy Jackson and the Olympians by Rick Riordan. Over one hundred words related to Greek Mythology (and a few characters from the books) are hidden in a 30x30 grid. Do you have some free time over the holidays? Do you like word searches?
Click here to view and print yourself a copy! Or just look below and see how many names you can find. (Sorry, there's no way to mark the ones you find here.) 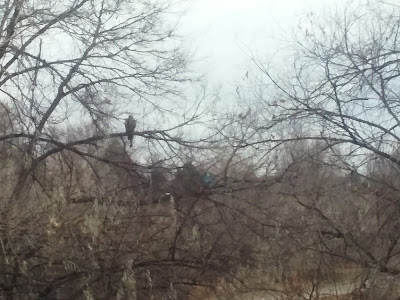 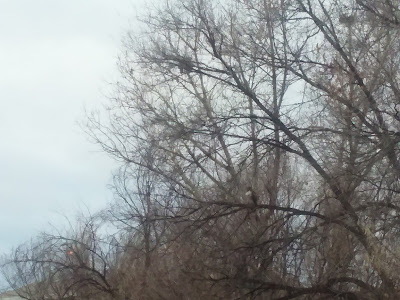 My thoughts this morning while on a walk through a park when glimpsing something unusual in a tree some distance off the path:

That's not a squirrel nest....
What is that?

I went back to take pictures, hoping it would stay put.

I needn't have worried. I got my pictures, continued my walk, and it was still there on my return trip.

It's kind of hard to tell from the pictures (my phone camera isn't the best) I think it is some kind of hawk, but it was huge - definitely over a foot tall. It had a white chest, you can kind of see in the bottom photo.

This Morning's Message from Hannah: 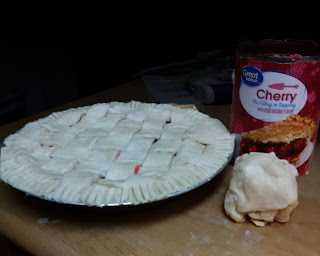 I'm so glad she's having fun, and doing what she enjoys. That pie does look delicious! I scratch my head at her timing, but I guess that is college life? 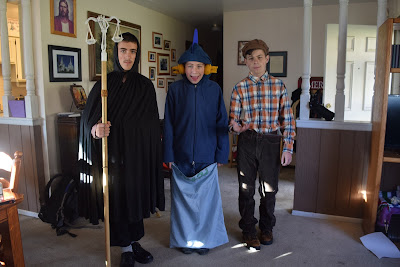 Josh was a grave cleric (a D&D thing).
Peter was a mudkip (a Pokemon thing).
And John was a boy from the early 1800s.

Has it Really Been 30 Years?

Thirty years ago I was a little twelve year old, uprooted from the only home I could really remember, and tossed into a new house, a new ward, and a new school. And in the whirlwind of adjusting to a new home, I met Tabitha. She was close to my age, petite with a round face and a cloud of bouncy, curly black hair, and she literally bounced when she walked. She quickly became my best friend. She lived around the corner from me and frequently we walked home from school together, and we had an ongoing joke about "walking her to the corner" while never exactly specifying to which corner we were walking the other - there were three street intersections between our homes. We wrote notes to each other. We had a little black book that we would write in and pass back and forth. Over time, I developed other friendships, but Tabitha was always one of my close friends.

Eventually we graduated from high school, and while we both went to BYU, we lived at opposite ends of campus and so we saw each other much less frequently. Then she got married. I went on a mission. We moved to different parts of the country. Nowadays, we don't see each other very often. I'm not very good at keeping in touch. She has eleven kids, and she home schools. But every once in a while we are able to get together and renew our acquaintance. She lives in Missouri now, near where my sister Kristy lives so last Thanksgiving when we were staying at Kristy's home, we were able to get together with Tabitha one day.

Last week, Tabitha and her family came to spend the night with us. They had been on a long vacation, and our home is conveniently located between Utah and Missouri, so Tabitha had asked if they could spend their last night on the road with us. When she first asked, I looked around our cozy three bedroom condo with our five at home, and then pictured their family of thirteen here as well and wondered how we could make it work. Tabitha assured me they didn't mind sleeping on floors, and I really was looking forward to seeing her, so I agreed to it. 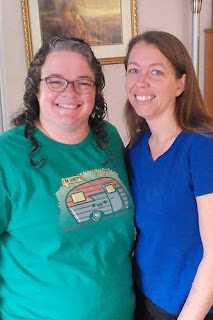 In the days before they arrived, I set about cleaning up the boys' room. We would need to pick up the clutter on the floor and move the bunk bed if there was to be room for anyone on the floor in there. The week before Tabitha's arrival, my brother Joey spent the night on a mattress on the floor in John's room due to an overnight lay-over in Denver, and the mattress was still there, so I asked John to wash the bedding.

And then the day arrived. They arrived in the evening having already eaten dinner elsewhere - just Tabitha, her husband and nine kids since one is on a mission and another was elsewhere. We talked and enjoyed each other's company. The older kids quickly became wrapped up with mine in creating D&D characters. The younger ones dashed here and there looking at my crochet creations, playing the piano, drawing pictures and chasing the cats. One little girl ran around in circles for several minutes while repeating, "I'm almost tired!"

We put most of the boys, including John, to bed on the floor in Josh and Peter's room. The girls slept in John's room, with the oldest on the bed and the three little girls sharing the mattress on the floor. The oldest boy slept on the floor in the living room, where Tabitha and her husband slept on the couches. I hope the cats didn't walk over them too much in their sleep.

The following morning we arose and pulled out cereal and oatmeal for breakfast. My kids didn't have seminary or school due to Veteran's Day, so we were able to sleep in, just a little. Tabitha's family loaded their stuff back into the car and they were gone.

Who knows how long it will be before Tabitha and I see each other again? But it seems that no matter how long it is between visits, we can always pick up where we left off. We still are and will always be friends.
at 1:18 PM No comments: Links to this post

John and the Congressional App Challenge

A couple days ago, a friend texted the following photo to me and said, "Not sure if you've seen this, [my husband] saw it on the congressman's twitter feed." 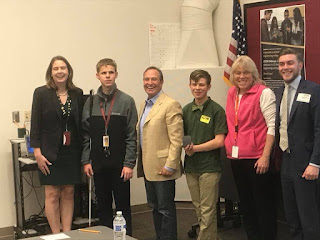 Well, I hadn't seen it. I recognized some of the people in the photo:  a high school teacher, the high school principal, a blind boy I had seen around the school, and of course I recognized John. But the congressman? When had John met a congressman?  I had to do some asking to find out what it was all about.

So there is this Congressional App Challenge, where students are encouraged to learn coding, and then winners are recognized by their congressmen. John wrote an app to help the internet be more accessible for blind people. It uses text-to-speech technology somehow, to describe what is on the screen. He has been working on it with the help of the blind boy in his coding club. Perhaps because he was the only student to submit an app in our district, he was recognized by Congressman Perlmutter.

I wonder, though, when did he find out he was going to present his app to the congressman? Was he excited about it? Why didn't he mention it to his parents? Did he just forget? Or did he not think it was important enough to bring up? He's a crazy kid, but I love him!

Only an Orphan Girl

In this highly entertaining production, audience members got to sing, boo, hiss and throw peanuts as they got involved in this tale of a villain who tries to steal a poor orphan girl's inheritance.

John received the role of Floyd, the piano player, who not only provided sound effects and musical background music - including themes for each character who ever walked onto the stage, but also accompanied the audience in rousing choruses during scene changes and before and after each act. Songs included "A Bicycle Built for Two", "O Susanna", "She'll be Comin' 'Round the Mountain", "Clementine", "Meet Me in St. Louis", "In the Good Old Summertime", "My Bonnie Lies over the Ocean", "Jingle Bells", "I've Been Working on the Railroad", "Camptown Races", and more! 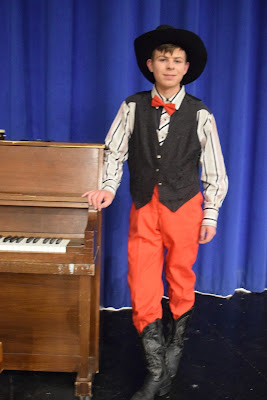 Joshua also got to participate in this production as part of the tech crew.

He got to help with building sets, including this incredible moving saw!

You can see more pictures from this fun and entertaining production on Northglenn High School's Theater Department Facebook Page.  (Confession: I borrowed most of the pictures shown here from that page.)
at 9:24 AM No comments: Links to this post

A Peek into my Subconscious

I've been interested in dreams lately. I had an idea for a story about dreams, and then started researching to learn more about them, and in the process started recording my own dreams and then looking up interpretations for them. If the interpretations are valid, I think my subconscious is frustrated with my life as it is today and is hankering for some kind of change.

For example, after family scripture reading this morning, Steven left with the older boys to go to seminary and Peter and I went back to our beds. I had an interesting dream, and when I woke up, I wrote it down, and later I looked up symbols. This is what I dreamed this morning (Symbols are quoted from Dream Moods Dream Dictionary):

Or maybe it doesn't mean anything at all.