Abish has vanished.
She left home a week ago
Oh, we will miss her! 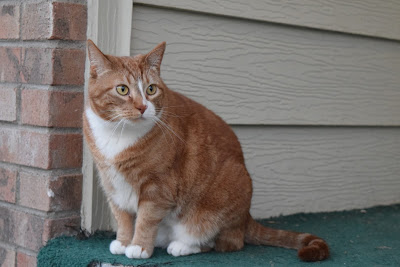 I wake in the morning and stumble out to the living room for family scripture reading. As the family assembles, Abish joins us in our circle. Sometimes I grab a knit mouse toy while the children are gathering and Abish swats and pounces, leaping high in the air. She is our expert hunter, occasionally bringing us birds, mice, katydids, and grasshoppers. As we read the scriptures, she lays happily on the sofa next to Steven. It was a tradition. she will be missed.

I sit at the table with my Frosted Mini-Wheats and my Honey-Nut Cheerios. Abish sits near by and watches as I eat. I must be careful if I become distracted or leave the table before I'm done - Abish will swoop in like a vulture to drink the milk from my bowl. When I'm finished, I take my bowl to the sink, and dump most of any remaining milk, but Abish races over and licks my bowl anyway. She loves the milk, but if she gets too much, she throws up. Again, it was a tradition, and she will be missed.

I remember one day I was eating Ritz crackers and she came, watching me intently. At one point, she grabbed one from my hand, dragging it off to eat by herself. I didn't know cats ate crackers!

Elsewhere in the house are reminders of her presence - the box of paper reams with the edges chewed and shredded, for example. She loved to shred cardboard. The blanket on top of the TV stand was her favorite place to sleep, and often snore to our amusement.

Hannah's bedroom was another favorite sleeping place. When the door was closed, she would meow and scratch, hoping that it would be opened for her, often in the middle of the night. It was about 5am last Sunday morning (the 22nd) that she was howling outside Hannah's door, and I picked her up and let her out the front door of the house so the rest of us could try to get a bit more sleep. That is the last time I remember seeing her. She might have come back in - she frequently went in and out all day, never straying far from the house. But that evening after dinner we opened a can of cat food - a ritual that the cats never miss - but Abish wasn't there. We called for her. We looked outside and called for her. We searched the house and we searched the yard, but she wasn't anywhere to be found. And she hasn't been seen since.

I contacted animal control. We put up signs. But with no luck. I dreamed about her almost every night for the last week, sometimes finding her in my dream and being so happy that she had returned, only to wake and be sad again because it was only a dream and she is still gone.

Ishmael and Lala remain of the four cats we once had. Ishmael has been wanting more attention lately, frequently standing up on me and requesting hugs. The poor guy is without his oldest friend.

Did she get attacked by a wild animal? Was she hit by a car? Did she get stuck in some garage or window well? Was she taken in by some lonely soul? Is she still alive somewhere? I think the worst thing is not knowing what happened to her. One way or another, we will miss her.
at 7:06 AM No comments: Links to this post

The Other Half of Mothers Day

I made the mistake of writing about my Mother's Day before it was done. I thought they had given me all their gifts, and all that was left was dinner... but I was wrong.

Dinner was ready and I was waiting to be called to the table to eat, but instead I was asked to sit at the table while the rest of the family hid behind the living room sofa, and out came the puppets. Did you see Steven's puppet show from our last family reunion? (If not, see here!) Anyway, same characters. In this episode, Lehi was talking with his boys about what they were going to do for Sariah for Mother's Day. Suggestions ranged from a cruise (Nephi and his boats...) to making breakfast in bed, and then the day arrived and some some of the gifts turned out better than others. In the end, Sam made a card and they all signed it, and Sariah was happy. I wish I had filmed it... but maybe I can get them to perform it again. Following the puppet show, I received a beautiful hand made pop-up card from the whole family. 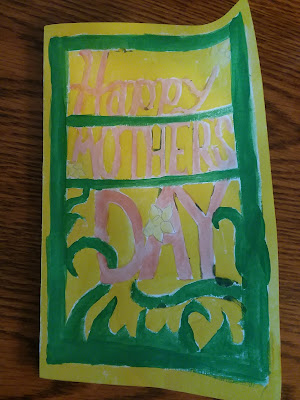 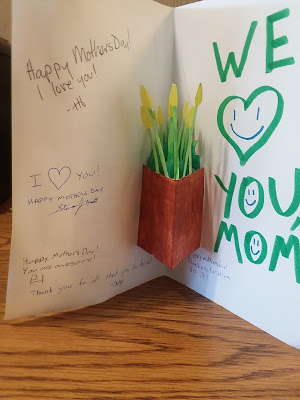 The day was finished up with some delicious strawberry shortcake, compliments of Steven. It really was a great Mother's Day.
at 11:29 AM No comments: Links to this post

My family gave me breakfast in bed this morning. We chatted about dreams while I ate. I got to read the comics first. Steven hid Kit Kats in the bathroom for me to find after my shower. I feel loved.

In Sacrament Meeting today, they had all the priesthood brethren come to the stand to sing "Love at Home". John played the piano and Joshua directed the music, as he does in Priesthood meeting each week. It touched my heart to watch them. I'm grateful that my sons have opportunities to learn skills and share them with others in the ward. I'm grateful for their willingness to serve.

I'm grateful for my mother. I'm grateful for the righteous example she has always set, and continues to set for me. I'm grateful that she and my dad are serving a mission, and teaching me and my children about service and sacrifice. Mom, I love you! Happy Mother's Day!!!
at 3:10 PM No comments: Links to this post

On April 14th, Steven and I left the boys and drove to Idaho to pick up Hannah from BYU-I where she has gone to school the last couple semesters. (see here.) We took her out to dinner that evening, toured the BYU-I campus (with a more knowledgeable guide this time) and then left her at her dorm one last night while Steven and I went to our hotel in Idaho Falls for the night.

The next morning, Steven and I took a walk along the river behind the hotel, enjoying the wildlife and the scenery, including the Idaho Falls temple, located just across the river. There were also some really cool benches along the path. 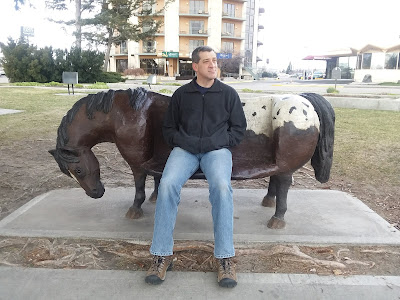 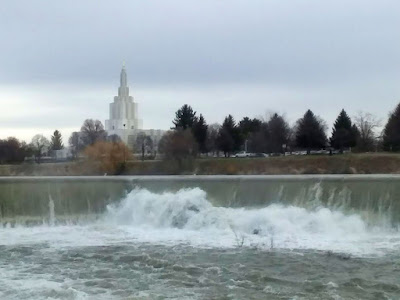 Eventually Hannah let us know she was ready and we headed back to Rexburg where we loaded her things into the car and then we set off to visit my sister Lindy in South Jordan, Utah. We enjoyed a nice quiet stay with her and Jessica that evening and then returned home the following day.

I have really enjoyed having Hannah home the last few weeks. The first couple weeks she accompanied me shopping and to institute, and volunteered to drive the boys to seminary every morning. I think a lot of the time she was bored. Now she has settled in and her life has gotten busier. She is taking online college courses over the summer, including a children's literature class and an art class, and that gives her things to do.

Sunday she was called to serve as a Sunbeam teacher in our ward, which means she gets to teach the 3-4yr old children's class at church. She also talked with the bishop and began filling out mission papers to serve as a missionary in the fall. Her availability date will be her 19th birthday this September.

Hannah got jury duty on Monday, and actually got to serve on a domestic violence trial which lasted all day Monday and Tuesday as well. While there were a few things she didn't enjoy, like long waits and getting stuck in traffic on her way to the courthouse on Tuesday and being late, I think she enjoyed the experience as a whole.

Last Friday, she started a new job working for a nanny agency. Friday was just training, and learning the rules, but this is a job she is excited about. Yesterday was her first day working as a real nanny.  Lucky girl gets to play with kids all day, something she really enjoys and get paid for it! My only concern about this job is that she doesn't get a lot of notice of whether or not she will be working on any given day, or where she'll be, or what hours she'll work. (This morning she got a text around 6:45 to see if she could be at a job by 7:30.) Since we share a car, it makes my life a little more complicated because I don't have the flexibility I'm used to. Someone suggested getting Hannah a cheap beater car while she's here and selling it after she leaves on her mission... I might need to look into it.
at 10:00 AM No comments: Links to this post

Northglenn High School presented "Les Miserables" on March 1-3. It was absolutely amazing, especially for a high school production. John and Joshua both participated, growing out their hair to unprecedented lengths. (Pictures below were taken by Anton Mayer, and were copied from his Facebook page) 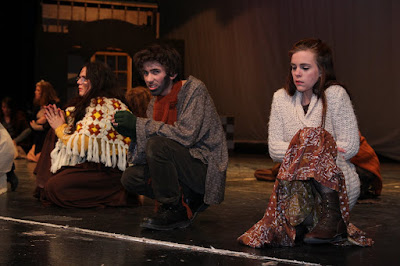 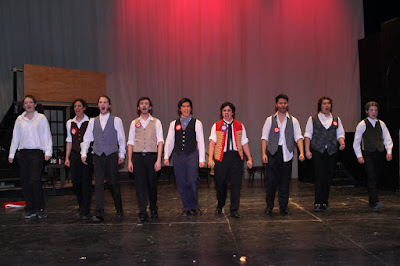 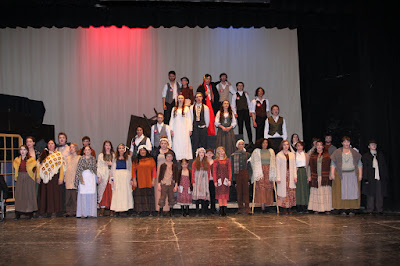 We bought a DVD of the musical so if anyone is in the area and wants to watch it, it is available!
at 9:07 AM No comments: Links to this post