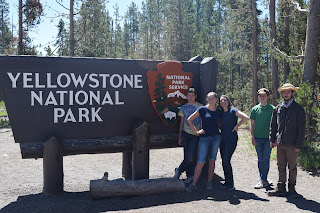 We first took our kids to Yellowstone park when Josh was around a year old. The kids were disappointed because we said it was a park, but there was no playground where they could play. This time, I think they enjoyed it a little more.
Steven's mom rented a cabin in Island Park, ID, and it was a really nice place for the 16 of us to stay. (Kathy, Andy and Megan and their two kids, and Karen's husband Joe and four of their kids plus the six of us. Karen wasn't able to come due to breast cancer and chemo treatments... I hope she enjoyed her quiet time at home that week.) 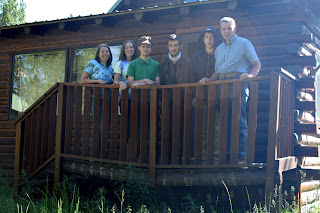 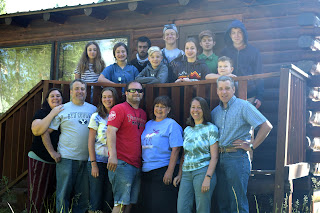 The best thing about Yellowstone is the scenery. Between the mountains, the rivers and the waterfalls, not to mention the trees and the geysers, there are so many beautiful vistas that it is breathtaking any way you look. 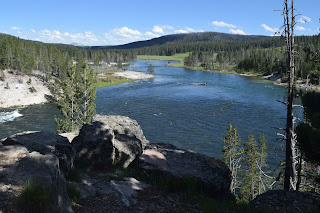 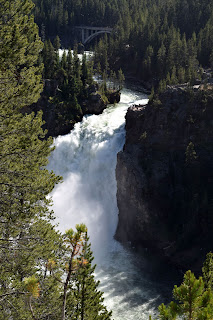 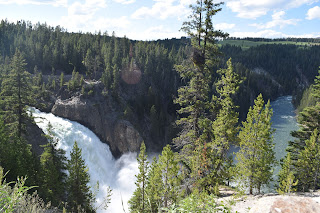 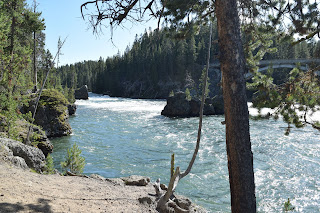 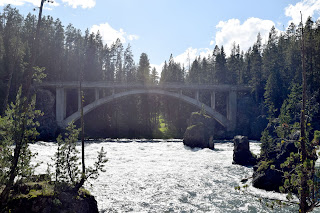 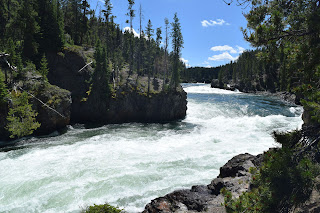 Yellowstone is famous for its geysers, fumaroles and hot springs. There are some amazing and beautiful things to see here, besides Old Faithful. 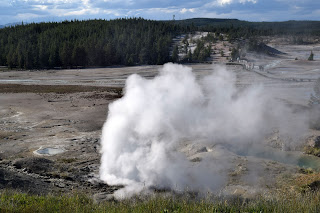 This thing was like a giant steam kettle at a raging boil just hissing loudly and blowing off a ton of steam. 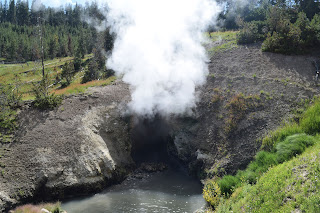 This is called "Dragon's Mouth Spring". It really looked like a dragon's cave with the steam from the dragon's mouth pouring out. It sounded cool too, but that is hard to capture in a picture. 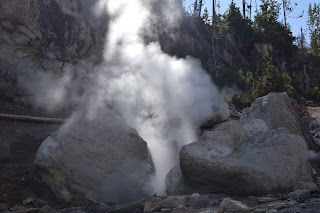 More hissing steam coming out from under rocks. They say that the geothermal features in Yellowstone are due to a giant volcano underground that went dormant thousands of years ago but is still bubbling and churning under the surface, but I still wonder if dragons aren't involved with it somehow. Likely there is a huge chamber filled with treasure hidden just below somewhere that requires many dragons to guard and keep safe. I think scientists should look into this. 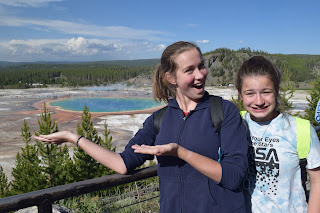 Hannah and her cousin Kaylee overlooking Grand Prismatic Spring, which is the real-world equivalent of the Eye of Sauron, though I don't think it has the same kind of magic powers. It still looks cool.

Another fun part of Yellowstone is the wildlife. John saw a bear, but here are the animals of which we were able to get pictures. 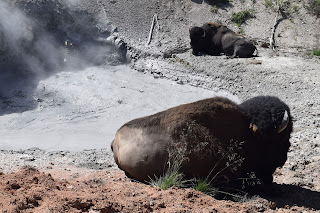 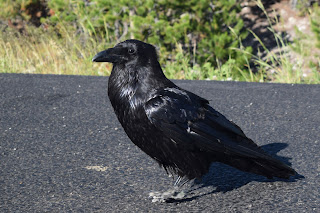 This raven was the parking lot attendant in on of the little turnoffs we stopped at. He just hopped around keeping an eye on things, particularly watchful for negligent people who carelessly would drop food. Dropping food was frowned upon by the park management and this raven made sure to clean up any spills so as to not give other people any ideas.
(Also, something we learned on our rafting trip was how to tell the difference between crows and ravens. Both are black birds that are about the same size. But under their wings are special feathers called "pinons" that help them in flight. Crows have four under each wing but ravens have five. So the difference between a crow and a raven is just a matter of a pinon.) 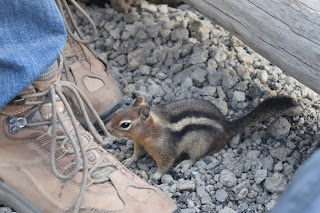 Everywhere we went there were signs telling us to stay at least 25 yards away from any wildlife (and 100 yards from bears). The only problem was, most of the wildlife can't read. This little chipmunk for example, was not maintaining proper social distancing. 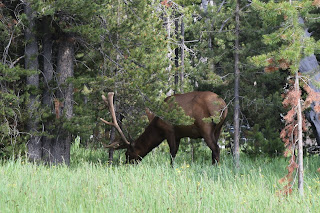 This is either a deer or an elk, which has some cool antlers. 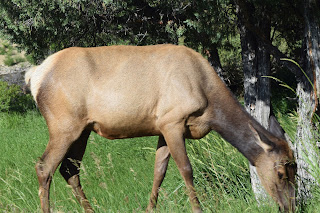 This is another deer or elk looking thing. One of the downsides of visiting Yellowstone is that you see so many cool wild animal things that after a while you just get sort of ho-hum about seeing more of them. By the end of your trip you are so desensitized to seeing wild animals that you start getting mad at all the other inconsiderate visitors who are slowing down to look at some cute bear cub and its mother playing in the center of the road that you just want to honk your horn and drive around them. "Get out of my way you wild animals! I'm hungry and we're having pizza tonight!"

There are also a lot of things to do in the park. We did a lot of driving around, just admiring the views, but we also got out and did some sight seeing and hiking. For a while, the kids (and Steven) sat on every bench they came across in order to rate it. 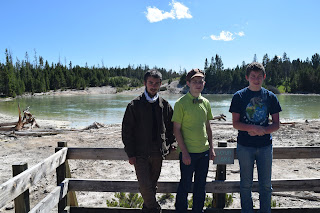 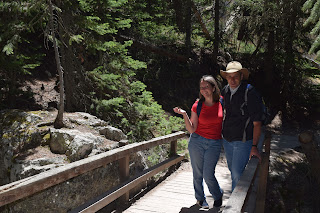 A rare picture of Steven and MaeLyn. Normally one or the other is behind the camera so I'm not sure how this happened. 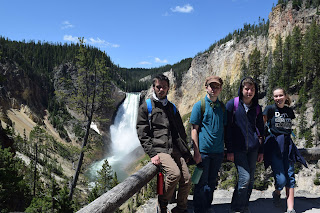 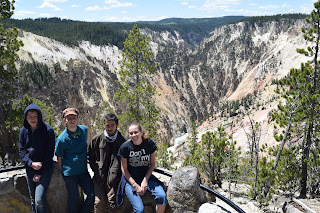 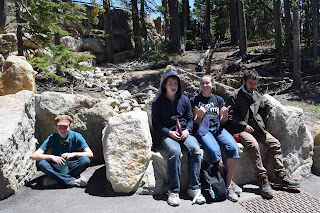 HANNAH: Wow, this bench is just the right height! And the back is pretty comfy.
PETER: Also, I like the added benefit of arm rests on the sides. That was really thoughtful.
HANNAH: Agreed. I'd give this one 5 stars.
JOHN: This bench is terrible. Way too low to be enjoyable.
HANNAH: Um, that's the place for the wheelchairs.
Steven, Hannah and Josh went river rafting, and then we all went out for ice cream at an adorable little ice cream stand in Gardiner, just outside the north entrance to the park. 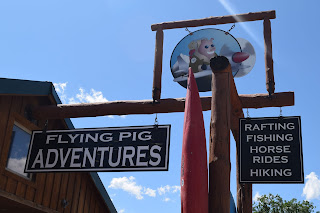 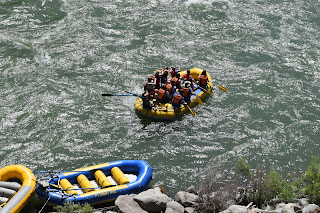 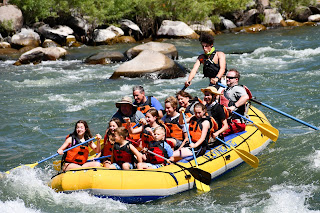 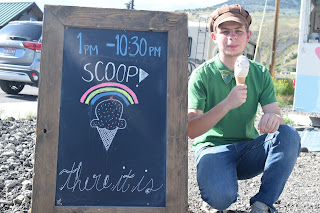 .
In all, we had a really fun time. We enjoyed spending time with family. We enjoyed seeing the wonders of God's creations. And, as usual, we were grateful to be able to return home again at the end of the week.
at 5:39 PM