It All Happened at 1:30 in the Morning

Last night at 1:30am, MaeLyn and I were fast asleep, as we often are at that time of night. We were jolted from slumber however by a loud, shrieking, piercing sound as something came in suddenly from the window and streaked across the room. We were both out of bed and on our feet in an instant, fearing that maybe the sound had come from a Russian guided nuclear missile, or maybe the lead ship from an alien invasion force, or possibly even a rabid squirrel. We decided to investigate.

We turned on the light and the first thing we saw was our cat Lala looking guilty. Had he had anything to do with giving the Russians the coordinates to our house? Had he led the alien invasion force right in through our window? Had he chased in the rabid squirrel? Before we had a chance to ask him he ran down the hallway away from us.

Taking a flash light so we didn't wake up the rest of the house we followed him down the hall. He had stopped near the piano, not wanting to go any further. In fact he seemed to be watching over something, making sure it did not escape. Fearing for my life but knowing what I had to do, I shined the flashlight under the piano bench. And that was when I saw it:

Now our cats have brought many things into the house over the years: grasshoppers, mice, lizards, birds. Some were dead while others were still alive. This bunny rabbit was still alive and though it was obviously a very young baby rabbit it was easily the largest thing our cats had ever brought inside. And the strange thing in our minds was that we never considered Lala to be much of a hunter. In fact, I think this may be the first time he has ever brought anything into the house.

Anyway, after a short chase we were able to catch the cute and fuzzy little bunny (who was very soft) and release him back into the wild. We then closed the window and told Lala to stop waking us up at night. And then we went back to bed. The end. 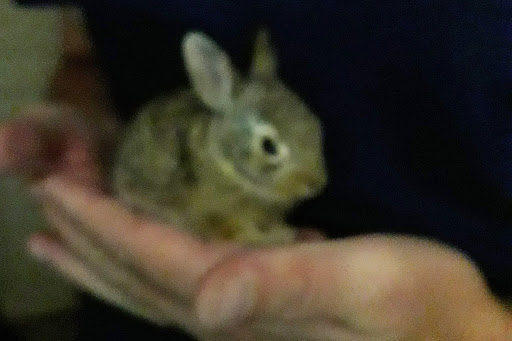